My husband's little sister is visiting from the East Coast, which, as most of you have probably heard, was pummeled with unseasonably wintry weather this weekend. In an effort to give my sis-in-law one more wink of summer before she heads back home, we drove down to Santa Cruz today.

All three of us grew up spending time down the Jersey Shore in Ocean City, NJ which is known for its carnival-like boardwalk. I've always envisioned the Ocean City boardwalk as a real-life incarnation of Pinocchio's Pleasure Island. The boardwalk boasts dangerously rickety old rides, a rainbow of blinding lights, and an army of staggering drunk folks.

Santa Cruz also has a boardwalk, which attempts to mimic the classic Coney Island/Atlantic City experience. It's not nearly as expansive, but still seems all-too-saccharine. In other words, it's just right.

When we arrived, however, we realized that every ride, attraction and booth was closed. October is considered off-season so it's open during weekends only. Instead of filling up on cotton candy and fried Oreos and riding the Double Shot, we wandered the The Beach Boardwalk's vacant lacquered wasteland and I snapped a few creepy pics. Happy Halloween everyone! 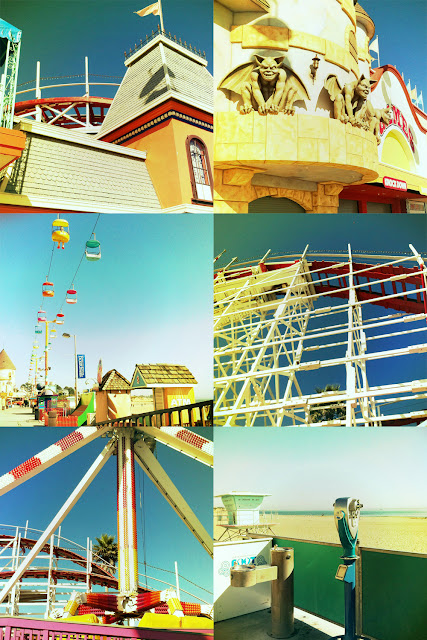 How did you spend your Halloween?
Posted by Evgenia Lingerie at 9:57 PM No comments:

Marie Antoinette: Shoes On A Budget

Just in time for Halloween... this is cross-posted from my Tumblr. Enjoy!

Loved the shoes in Marie Antoinette?  Dear God, so did I.

I’m a freak for historical costume.  When I think of what I could be wearing were it, say, 1750, 1860, or 1949, I get a little upset.  People tell me “You can just wear costumes all the time…  after all, you do live in San Francisco!”  True, but I’m also a (mostly) sane individual who would like to retain her dignity and circle of friends, thank you very much.  So instead of wearing corsets, hoops and seamed stockings all year round, I reserve those outfits for special occasions.

After all the Marie Antoinette hubbub caused by the eponymous 2006 film, I decided that, sooner or later, I must dress as Marie Antoinette for Halloween.  That time finally came last year when I wasn’t working more than a few hours a week and was jonesing for a project.  While I had no trouble making a corset, petticoat, shift and pocket hoops from scratch, shoes were another issue entirely.  Nowhere (I mean nowhere) had decent Rococo shoes.  I kept coming across travesties like these… and prohibitively expensive beauties like these (from Peter Fox)… …but could find nothing that bridged the gap of eh/cheap to OMG/expensive.  I wasn’t asking for much, just a court-heeled mule with a semi-pointed toe.  I could do the rest.  But it just wasn’t happening.  I spent an unreasonable amount of time online looking for shoes I’d only wear once or twice.  What the hell was my problem?  And THEN… I found them.  For less than $25 on Overstock! They had a close-to-perfect heel, and were already embellished with rhinestones.  My only complaint was the presence of an ankle strap, but that would be a cinch to cut off.  There was also the issue that the satin in the shoes was synthetic and therefore might not take dye as I had hoped.  But no pain, no gain, right?  At worst, the dye would remain on the surface, but run off the shoes if they got wet.  Whatever.  I wasn’t going to Wildwater Kingdom, I was having a Halloween party!  Time to take one for the team!

So, armed to the teeth with a bottle of teal Rit dye, a sponge brush, a glue gun, sharp scissors, $10 of random vintage ribbons and trims from The Ribbonerie and a roll of masking tape, I transformed the above budget bridal shoes into these: Peter Fox’s shoes are definitely more accurate, but accuracy wasn’t necessarily the goal here, and hell, I loved making them!
Posted by Evgenia Lingerie at 8:00 AM No comments:

She's up! Blue and bedecked in beautiful bows... swing on by the Honey Cooler Handmade shop to sneak a closer peek. 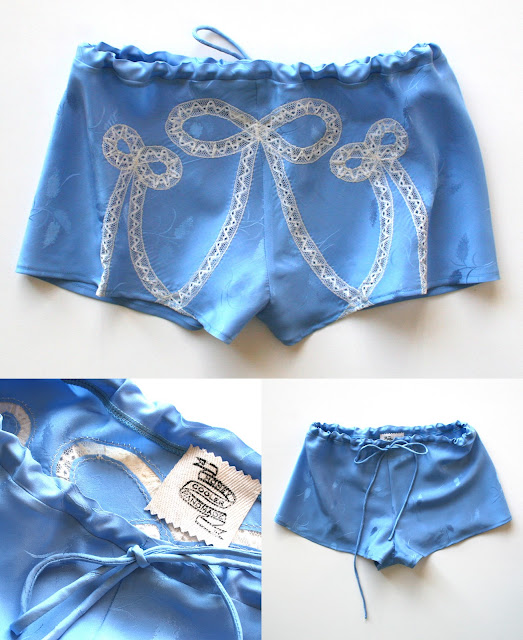 Posted by Evgenia Lingerie at 7:56 PM No comments:

The crescent moon is one of my favorite motifs of all time. I wear a gold crescent moon around my neck almost every day and I used one for my Luna Garconne Tap Shorts. Suffice it to say, there will definitely be more in Honey Cooler Handmade's future.
So, this lovely montage is possibly the most lovely thing I've seen all day. From the always-amazing How To Be A Retronaut.

It's hard to explain insertion lace to people who have never really examined it before. Typically, the lace is sewn down on a garment, and then the fabric behind the lace is carefully snipped away to reveal a totally sheer motif. Showing sheerness in photos can be difficult... that is, unless you have the right light!
So, here's a sneak peek at Billie's triple-bow-on-the-butt action against my chandelier. I'm about to sew her into a pair of uber-sweet shorts. She'll be in the shop tomorrow, so get your trigger finger ready! 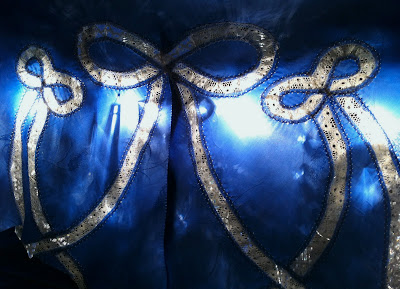 Posted by Evgenia Lingerie at 6:46 PM No comments:

Do You Have What It Takes...

From How To Be A Retronaut (one of the best sites ever), a list of the ideal assets for the perfect screen star, circa 1928.

Posted by Evgenia Lingerie at 11:29 AM No comments:

There's nothing quite like sewing up a custom corset, listing it, then having it purchased within an hour of posting it. 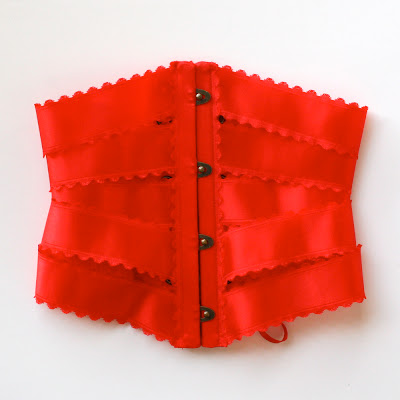 Speaking of custom corsets, if you've been dreaming of one, convo me! Fitting requires three simple measurements and they start at $115 for basic ribbon styles (like the one pictured above). Looking super sexy doesn't have to break the bank!
Posted by Evgenia Lingerie at 7:15 PM No comments:

Now on Etsy: Margie and Oralie

Check out my newest shining stars, the Margie Deco Camisole and the Oralie Bow Belt, both available in the Honey Cooler Handmade shop now. 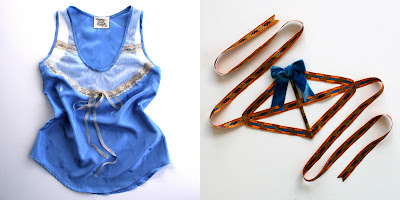 Margie Deco Camisole, Oralie Bow Belt
Margie is made from a lovely wheat motif cornflower blue silk jacquard with a totally sheer cotton tulle yoke and a beautiful antique beading lace detail. She speaks to the romantic in all of us - with all the fussiness of Victoriana and the simplicity of a basic cut.

Oralie is made from a sumptuous antique Edwardian brocade ribbon and finished off with a yummy blue velvet bow... the perfect pops of color for the fall days ahead.
Posted by Evgenia Lingerie at 3:32 PM No comments:

Julia is one of my favorite Deco Camisoles so far. She was inspired by Julia Morgan, the architect behind the gorgeous Art Deco monstrosity that is Hearst Castle. And lucky for me, she just co-starred in a shoot for Piecemaker Jewelry by the uber-talented Lisa Lau! Her earrings take center stage for sure... I'm so happy to have HCH included in the shoot!
Sneak a peek below. More photos from the shoot are here. 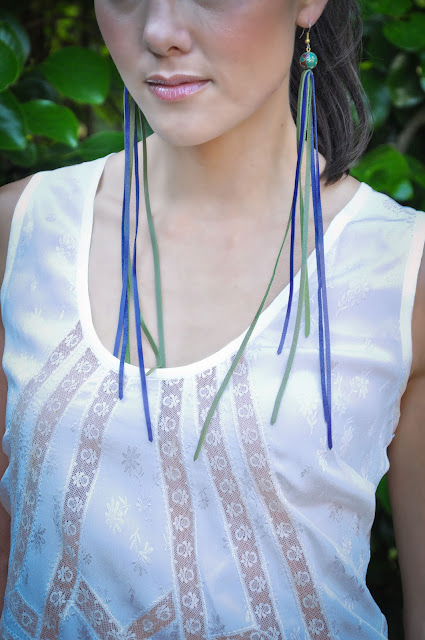 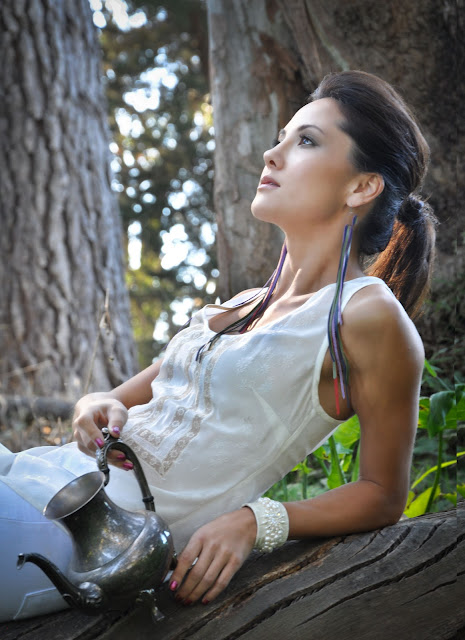 Photography was by Iann Ivy, the gorgeous model was Alicia Forbrich, hair and makeup were by Araceli Ramos, and the lovely cuff in the second photo is by Robin Stelling of Creative Beadz.
Posted by Evgenia Lingerie at 3:55 PM 2 comments:

This shouldn't be news to anyone, but I'm a costume nerd. You can tell so much about the zeitgeist of a particular era by looking at what people were wearing back then. What's great about the 20's is that the departure from the lace-heavy, buttoned-up Edwardian era was so incredibly in-your-face, like so much of what was going on during that time. The 1920's saw a swift change from the uber-femme corseted S-curve Gibson Girl to the boyish taping-her-breasts-down flapper in a very short period of time. Edwardian Silhouette (left), Flapper Silhouette (right)
For so long, trends changed over a period of decades. In the 1700's and 1800's, silhouettes gradually morphed over the course of years. These days, cinched waists and shutter shades are in one season and out the next.

While costume history is pretty fascinating, it also generalizes. The subtle nuances tucked away in the broader tale of fashion history are pretty cool too. This dress, currently on Ebay, is the perfect example of merging a boyish silhouette with girlish nostalgia. The woman who owned this dress had a soft spot for the Edwardian era. She eschewed fashionable simplicity for Art Nouveau frou frou, yet stayed on-trend. Amazing. I wonder where she wore this dress...

So, I covet this lovely piece. Take a peek! 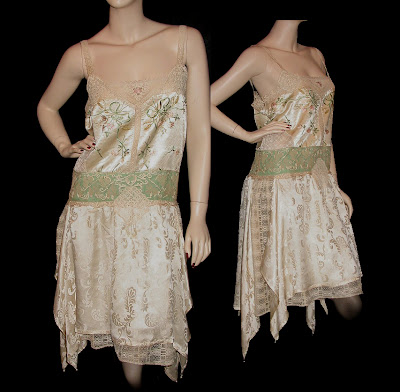 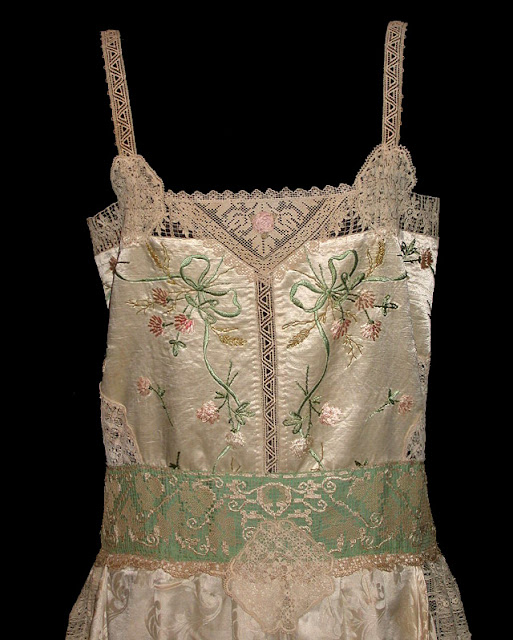 Posted by Evgenia Lingerie at 9:24 AM No comments:

Just because I lose my mind when I see pretty lace and spend my days sewing up uber-femme (and some might say frou frou) pieces, it doesn't mean I can't appreciate a little morbidity. In fact, Halloween is my favorite holiday! Growing up on the East Coast I learned to appreciate the swift snap of fall, the crunch of leaves beneath my shoes and the smell of burning wood and tractor exhaust on a haunted hayride. I love fall and I love all things spooky!
So, as Halloween approaches, meet the darker side of Honey Cooler Handmade with the Morgana Deco Cami. 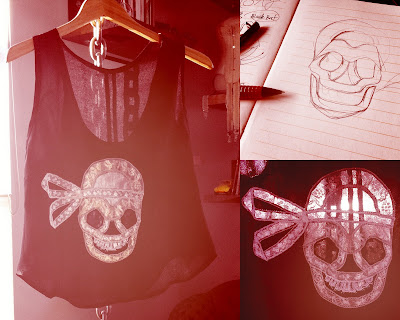 Morgana started as a simple sketch, inspired by some of the lovely lacey bone motif pieces from runways past. Though I'm proud of Morgana, McQueen did it best back in 2010... Morbidity and beauty can truly be one and the same. Look for Morgana in the Honey Cooler Handmade shop tomorrow.
Posted by Evgenia Lingerie at 6:54 PM No comments: