The Age of Deliciousness

In general, my taste in podcasts is pretty low-brow. I'm an easily amused individual who isn't as well-read or bookish as she ought to be, considering having two degrees (one in writing). But hey, my strong suit is design, not rocket science, so I won't let it get me down too much.

I will say, though, that I'm a huge fan of The History Chicks. Their podcasts cover a variety of female historical figures from Marie Antoinette to Helen Keller, covering the little tidbits about their lives that I love to hear. I covet details, and this podcast has them all. Last week I listened to an older episode I'd skipped over, which was a minicast covering Edith Wharton's The Age of Innocence and Scorcese's film adaptation of the novel. The podcast inspired me to re-watch the film, since the last time I'd seen it was sometime in middle school.

And what details there were! Just take a gander at all that film has to offer. I won't even go into the story - you'll just have to see it for yourself, but the costumes were downright delectable.

Posted by Evgenia Lingerie at 1:58 PM No comments:

There is so much new in store this week! It's been so satisfying transforming some of my most coveted ribbons, fragments and laces into truly wearable pieces. Check out the freshest additions to my Honey Cooler Handmade Etsy shop! 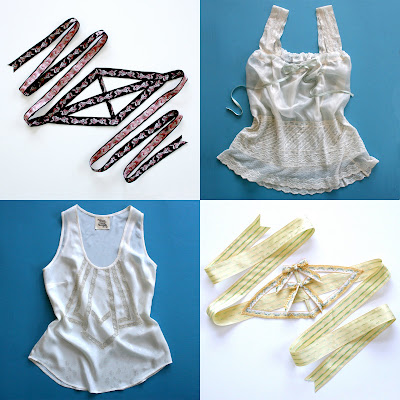 When I visited Hearst Castle last month, I was inspired by architect Julia Morgan's awesome design sensibility, so I named my latest Deco Camisole after her! I love this cami because it's hard-edged Deco motif is etched in the softest lace on the sweetest floral jacquard ground, and I'm all about dichotomy! 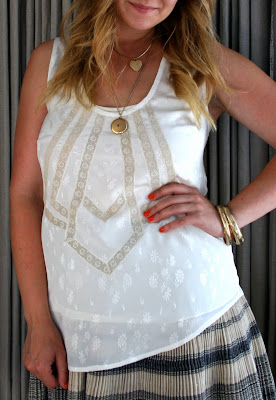 The light in my apartment isn't suitable for official product shots yet, so Julia will be up in the Etsy shop tomorrow. For now, sneak a peek of her in action. Perfect for the warm summer months!
Posted by Evgenia Lingerie at 7:03 PM 1 comment:

New This Week: Mamie and Molly 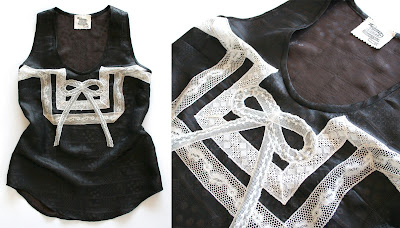 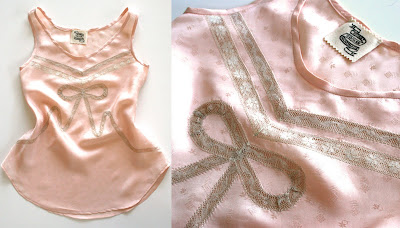 Molly
Posted by Evgenia Lingerie at 1:54 PM No comments:

My peachy confection, the Audra Ribbon Corset, takes center stage in these lovely photos by Kirsten Parnell of Elyse Photography. I was so excited when Kirsten contacted me asking to shoot my work, and I absolutely love the finished product! 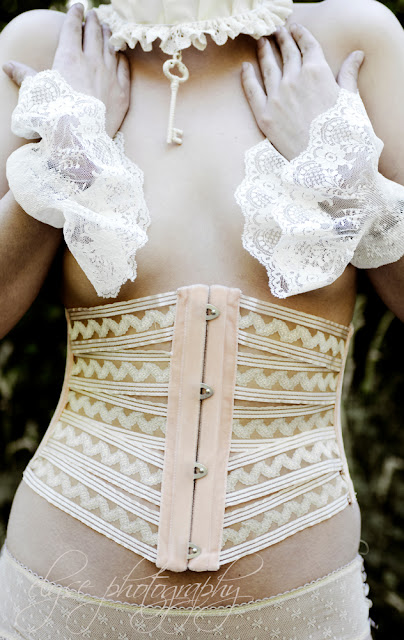 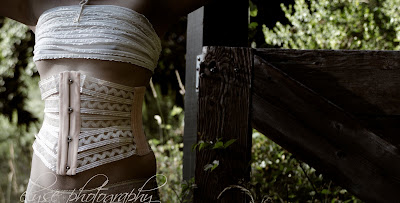 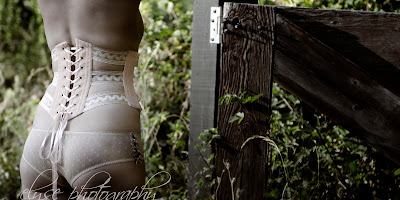 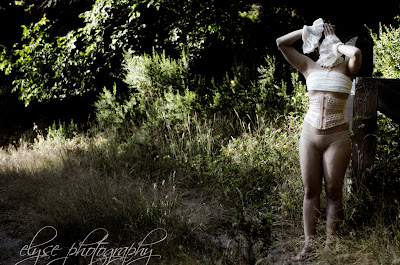 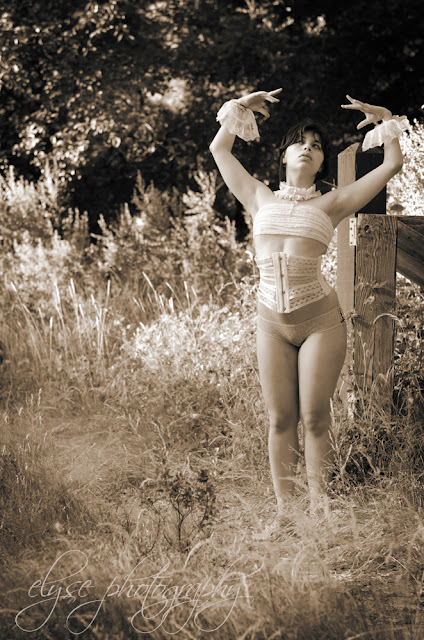 Posted by Evgenia Lingerie at 8:55 AM No comments:

I've been hard at work throwing this beauty together for the past two days. Rosie is made of gorgeous vintage lace, (what I believe to be) Edwardian printed featherweight China silk, glass horseshoe buttons and lots of love. I was hoping to list her today, but the light in my house is too dark for decent photos. Check her out on Honey Cooler Handmade tomorrow! 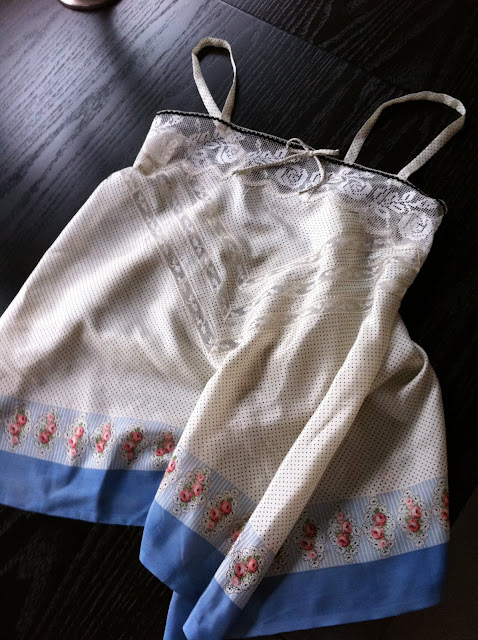 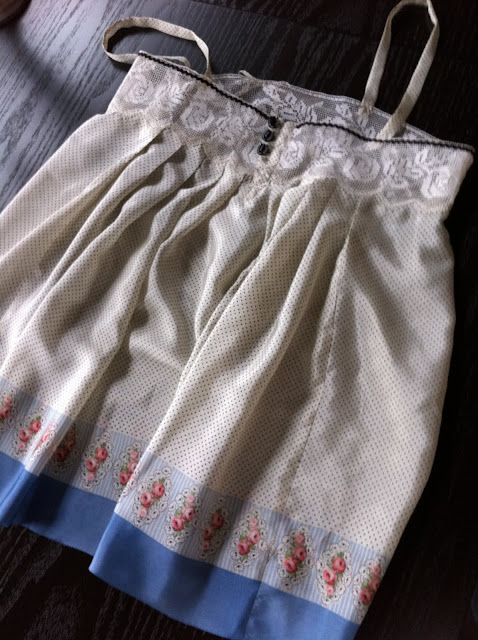 Rosie Back
Posted by Evgenia Lingerie at 7:03 PM No comments:

Catch Me at Capsule!

I received a chubby envelope in the mail today, stuffed to the brim with flyers for Capsule, a design show in Hayes Valley that's coming up on September 18th.

I'm so excited to see my name printed in the program! 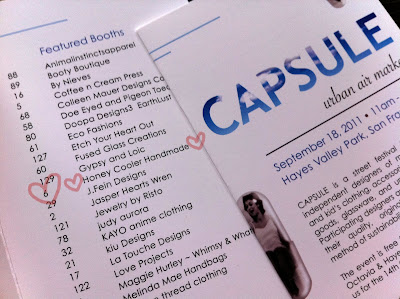 You'll be reminded a billion times before then, but come say hello and make me the happiest flapper this side of the Mississippi. If I can legally and logistically swing it, I may actually make Honey Coolers for my customers!
Posted by Evgenia Lingerie at 7:42 PM No comments:

A Flurry of Knickers

I've been having a blast sewing up knickers over the past few weeks!

From left to right: Zandra, Estelle, and Melinda. All available in the Honey Cooler Handmade Etsy store.
Which one's your favorite?
Posted by Evgenia Lingerie at 5:33 PM No comments:

There's nothing quite like beautiful high-end fashion to stir up a deep well of yearning on a lazy Saturday morning.

I should preface this rest of this post by saying that I do indeed own a Lela Rose dress, purchased on the Outnet for a mere fraction of its original price. It's one of my most prized possessions and its construction and fit really do justify the high price tag. Nothing else I own looks as good on. Nothing. Naturally, now that I've tasted Lela Rose's forbidden fruit, I can't stop thinking about owning another dress. And I think I may have just found the one. 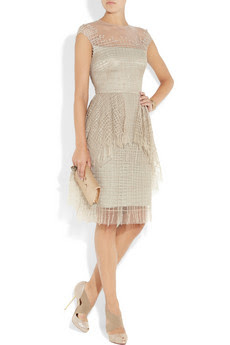 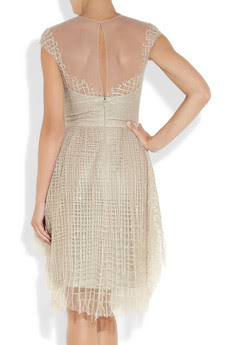 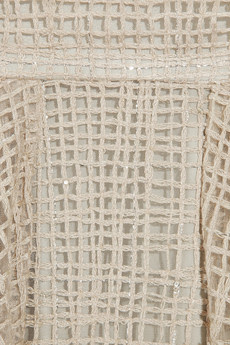 Inspired by painter Gerhard Richter, Lela Rose takes an artisanal approach to FW11 with its gossamer tulle dress. This piece is intricately crafted from woven cotton and sequin panels, which craft the perfect silhouette.

If the above photos don't move you, scoot on over to Net-A-Porter to check out a video of the dress in action. The model looks as if she's being trailed by a cloud of fairy dust, and really, what woman doesn't dream of wearing something that makes her look downright ethereal and sexy at the same time?

Excuse me while I go search my couch cushions for an extra $2500.
Posted by Evgenia Lingerie at 10:24 AM No comments:

If HCH Made Light Fixtures...

I've never considered getting into metalwork (thought it would be awesome to make jewelry), but after seeing this specimen at Big Daddy's Antiques in Potrero Hill I may just change my tune. 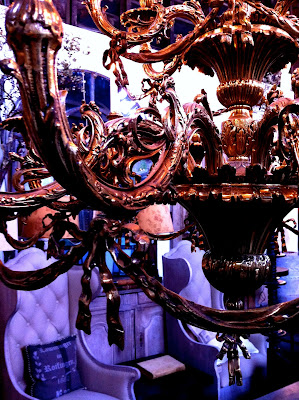 Just because it's metal, doesn't mean it can't drip with ribbons, bows and general frou frou.

Like an excited schoolgirl I pointed this baby out to my husband who shook his head: "Too girly."

No. Such. Thing.
Posted by Evgenia Lingerie at 12:33 PM No comments:

Pair the incomparable sheerness of vintage cotton tulle with a lovely grassy green cotton voile and you get Olive, the newest addition to my Etsy shop. Check her out! 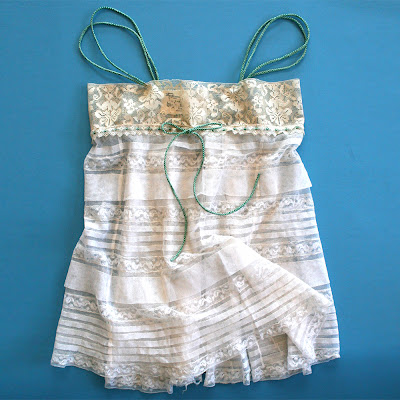 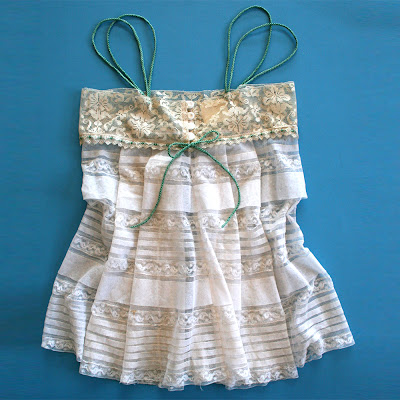 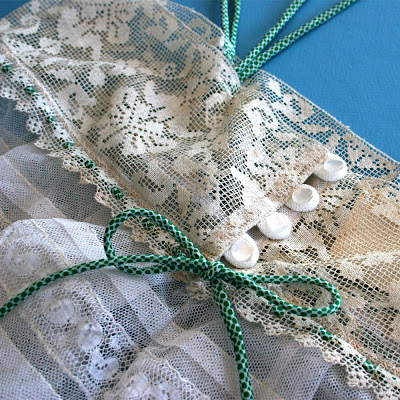 Posted by Evgenia Lingerie at 7:17 PM No comments: