I've had a lot of requests for bralettes from customers over the past year or so and I'd always hesitated to jump into working on the project. When I worked in a lingerie store awhile back, one of our reps explained that her brand's most coveted bra contained over fifty separate pieces stitched together. Suffice it to say that making a brassiere is quite a daunting task. Lucky for me, bras in the 1920's were built on a delicate and basic foundation - no underwires, no side slings, no complicated architecture. Just an easy delicacy that blends effortlessly with the existing Honey Cooler Handmade line. 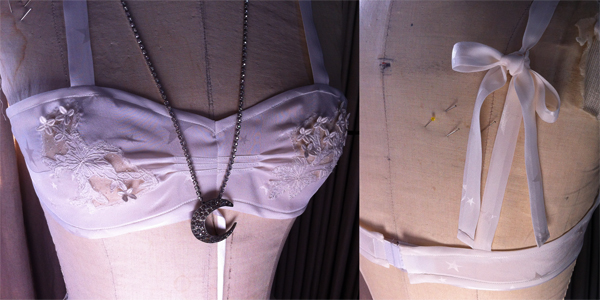 The Vaudeville Bralette features front pintucks a back hook-and-eye closure and straps that tie just behind the shoulders. 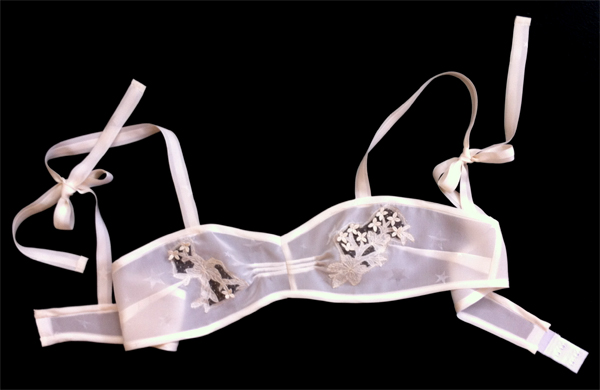 Keep your eyes peeled for more Vaudeville Bralettes as the range expands over the next few weeks. In the meantime, visit the HCH store on Etsy to see what else is new!
Posted by Evgenia Lingerie at 7:03 PM 2 comments:

More shots from the exquisite Gaultier exhibit at the De Young, including some undeniably iconic pieces. 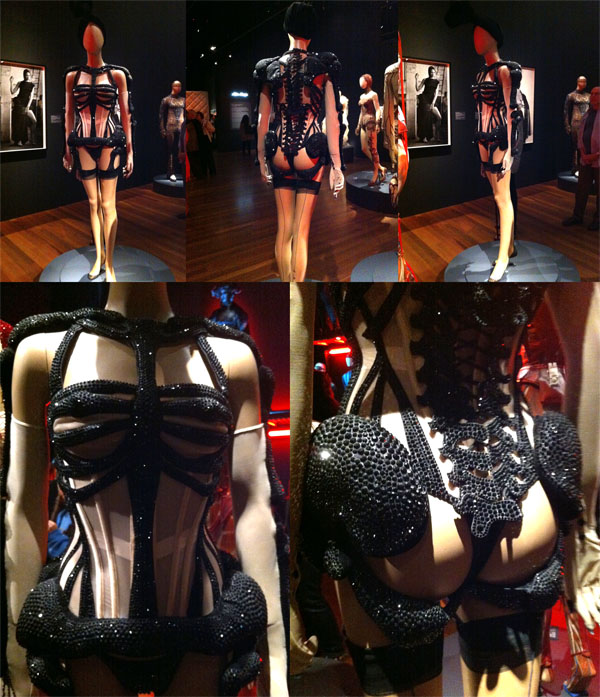 The Moins que Zéro ensemble was one of the pieces I was actively searching for while at the Gaultier exhibit. Dita Von Teese famously wore it on the runway at Gaultier's Fall/Winter 2010/2011 show, and while it was gorgeous in all the photos I've seen of it, in person it's enough to snatch your breath away form underneath your bedazzled ribs. Each bone is painstakingly studded with Swarovski rhinestones, right down to the individual vertebrae. 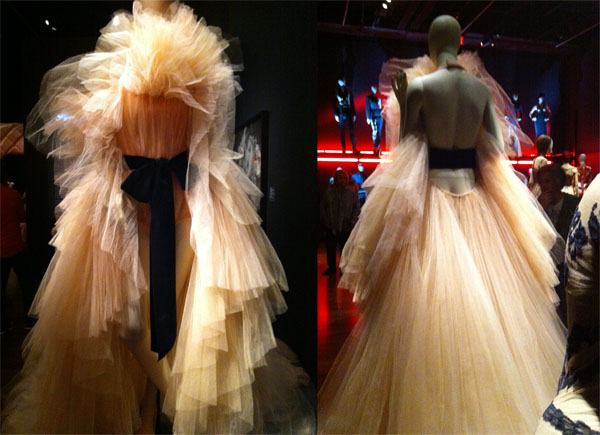 I couldn't find the name of this gown online. It was a stunning, conservative cloud of tulle from the front, with a sexy, extremely low cutout in the back. Gaultier does dichotomy to perfection. 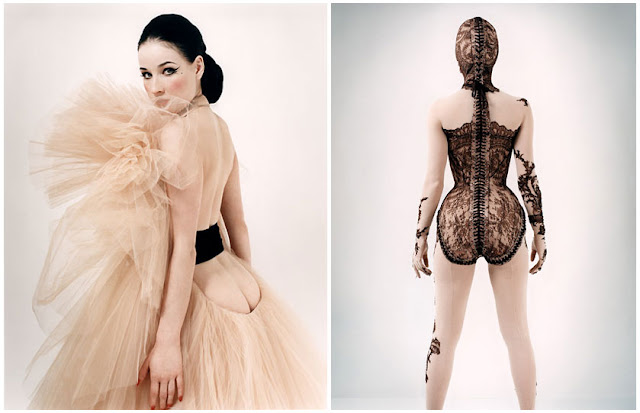 Dita Von Teese wearing the above and below ensembles, photographed by Perou.

Husband: "It must take forever to get into that thing". The lacing on this piece begins essentially at the crotch and then goes all the way up along the back of the head. The bodysuit base underneath the lace-covered corset is hand appliquéd with the most delicate Chantilly lace imaginable. 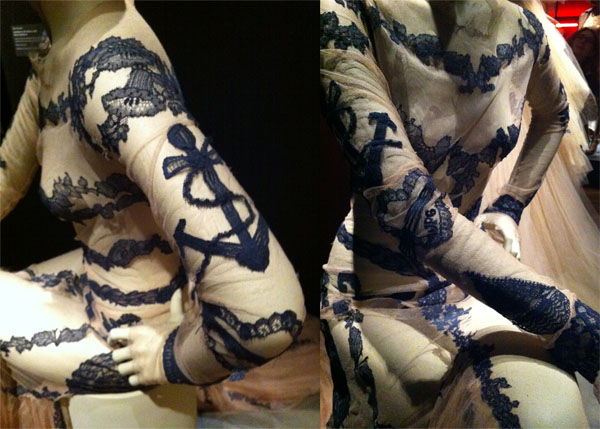 Lace tattoos... Gaultier is definitely a man after my own heart. 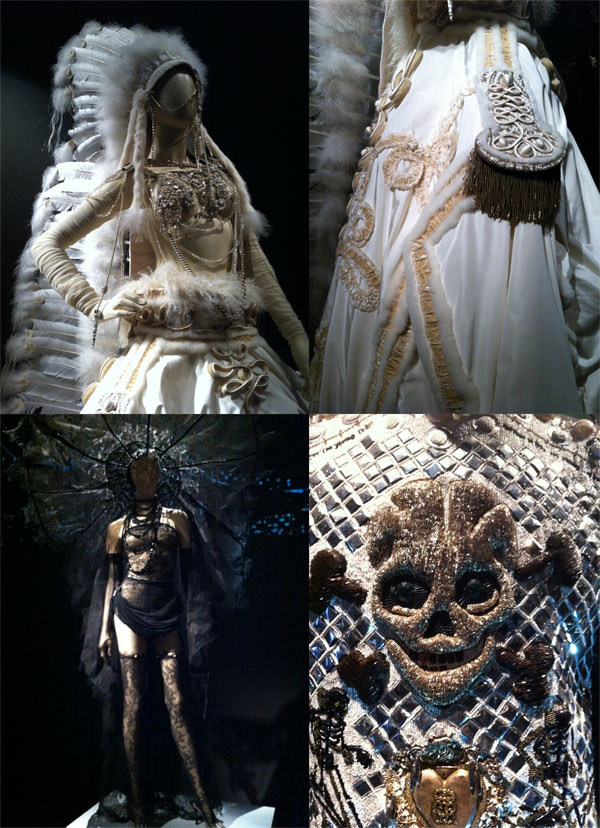 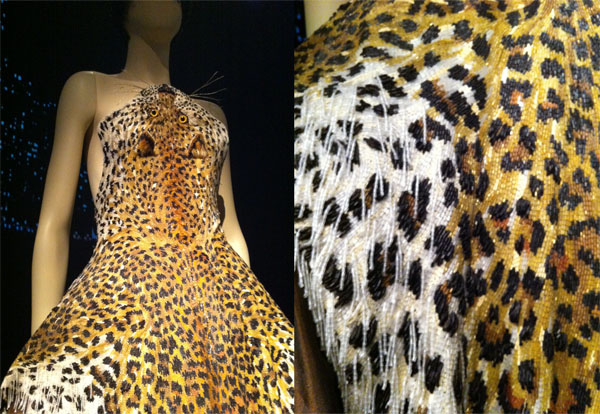 While it resembled a cheetah pelt from far away, the overlay on this gown was actually hand beaded. 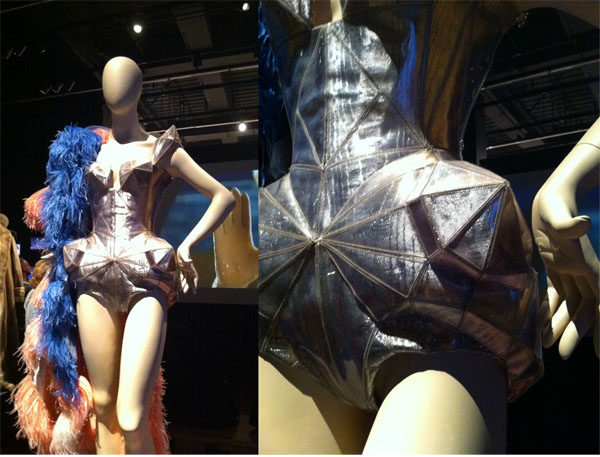 I loved this ensemble when it made it to Gaultier's fall 2009 runway show. It's even more lovely on a living, breathing model, though getting up close to it was quite a treat. On the runway it looks otherworldly, as if it was created from some alien mineral. Close up, it's metal mesh overlaid with vinyl and still exquisite.

Hope you enjoyed the photos! Did you visit the exhibit? What did you think?
Posted by Evgenia Lingerie at 6:13 PM No comments:

The Fashion World of Jean Paul Gaultier, Part I

It should come as no surprise, then, that I about lost my head when I visited the Jean Paul Gaultier exhibit at the de Young last weekend. There are really no words to describe the intricacy of Gaultier's pieces. I'm the ultimate perfectionist when it comes to sewing and Gaultier's couture is flawless. My sad little iPhone took less-than-stunning photos, but I still couldn't help snapping a million shots.

I adore Jean Paul Gaultier's aesthetic and affection for the female form, but what has always struck me is his regular use of non-traditional models in his runway shows, including Crystal Renn in 2005 and Beth Ditto in 2010. I would be hard-pressed to choose a favorite gown from this show, but the Auréole Gown was definitely up there. It was made from a mountain of silk tulle, which was delicately pleated, then topped with meticulous beading. Absolutely stunning. 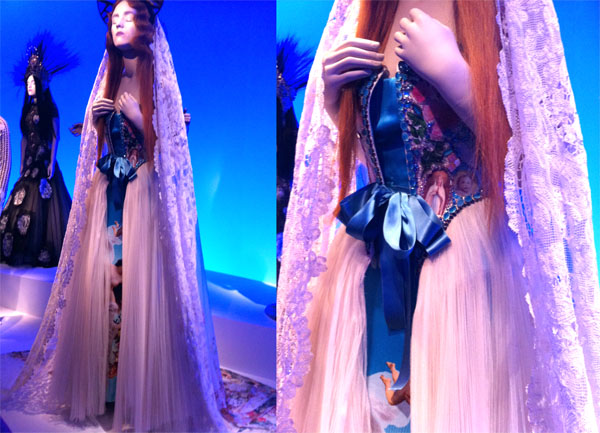 Gaultier's obsession with mermaids is apparent - he used shells and fish scales heavily as motifs for his spring /summer 2008 haute couture collection. 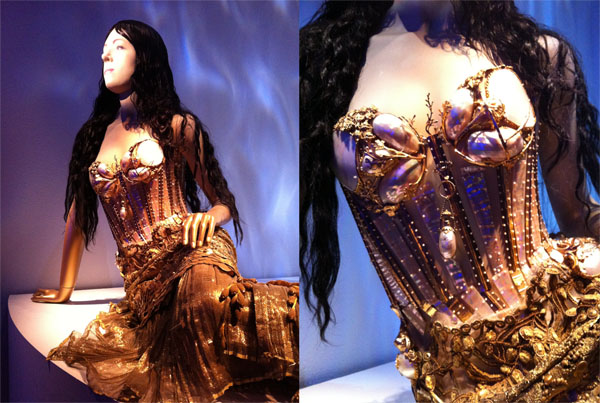 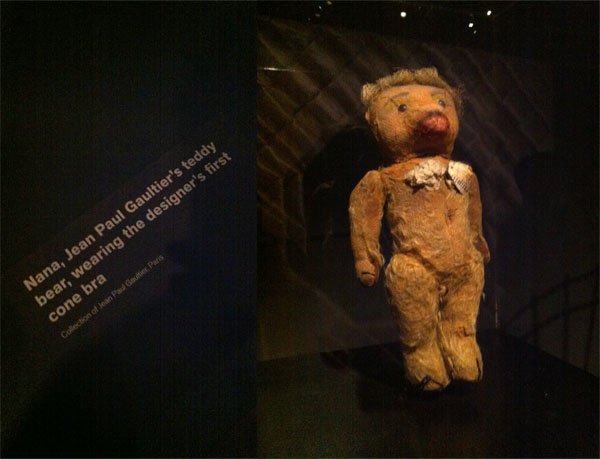 Jean Paul Gaultier's teddy bear is wearing lipstick and eye shadow and that, mes amis, is an awesome thing. The designer made a cone bra for Nana out of newspaper and thus began his foray into all things underwear.

Shots from the Boudoir room...

The entrance to the Boudoir had me falling all over myself. I could see gorgeous steamer trunk-inspired furniture, satiny bullet bras and corsets everywhere. A dream come true.

This corset dress was made entirely of ribbon - paging HCH!

I have so many more pictures to share, so stay tuned for more.

In the meantime, did you see the exhibit? What did you think?
Posted by Evgenia Lingerie at 5:08 PM No comments:

I've finally made some more Moonshine Chemises, as well as a cute little batch of Knickers. Check out a new stash of pieces now in the Etsy shop! 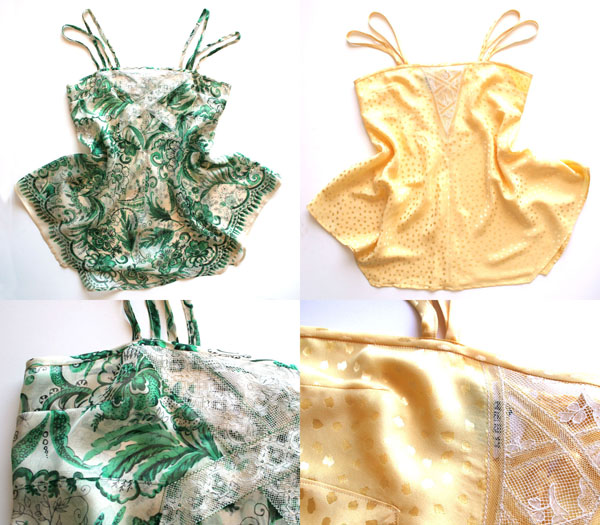 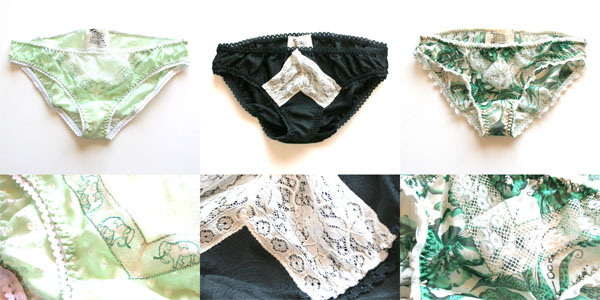 In addition to these pieces, I've also listed a brand new Peplum Deco Camisole, as well as another skull motif Deco Camisole. Head on over to the Etsy shop to see what's new and to heart your favorites.
Posted by Evgenia Lingerie at 2:01 PM No comments:

Another peplum has popped up in the Etsy shop! Say hello to Meghan, my new favorite piece. 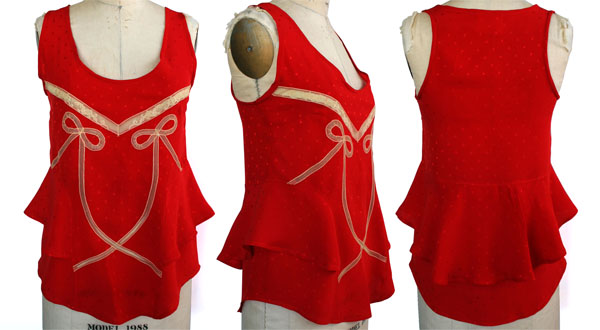 Meghan, pretty from every angle!

She's crafted from a lovely dotted silk jacquard with a double bow detail, dragon lace chevron and kicky peplum for a little extra oomph. Check her out in the shop, along with a bunch of newly listed lovelies.

Posted by Evgenia Lingerie at 9:26 PM No comments: