As I mentioned in last week's post, I participated in this year's Lingerie Secret Santa, and was delighted when a box arrived addressed to me from Harlow & Fox, a brand I've long admired and dreamed of trying for myself. As a former bra fitter and current-and-always busty girl, I'm certainly aware of the  complications that come with making bras for an ample bosom. Let me say this: there's a reason I only make Bralettes for the time being - there is a ton of work involved in crafting brassieres for larger busts. I have a huge admiration for companies that specialize in larger cup sizes, because the fit considerations are just so complicated past a C/D cup, and I've seen plenty of bras that don't quite fit the bill. So, Harlow & Fox, you absolutely rock and you have my full admiration!

Let me start by saying that Harlow & Fox's branding is absolutely exquisite. From the uber chic black magnetized gift box, to the wax seals and sleek lookbook, there is not one detail that founder Leanna overlooked. I can't remember the last time I was so excited to open a package! 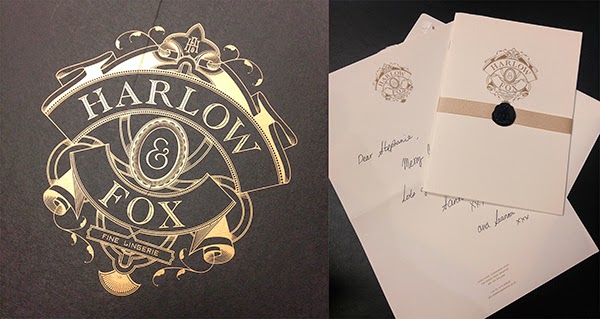 And now to the best part: the lingerie! Dreamy doesn't begin to describe the Eleanor set that Leanna sent. The Mink hue is a gorgeous fawny brown (silk and elastene, so stretchy and luxurious), with an oh-so-soft Chantilly lace detail. Leanna sent the Full Cup Bra and Classic Brief, which are both so comfortable and fit beautifully. I can't remember the last time I had a satin (let alone silk!) bra, so this set is truly a treat. 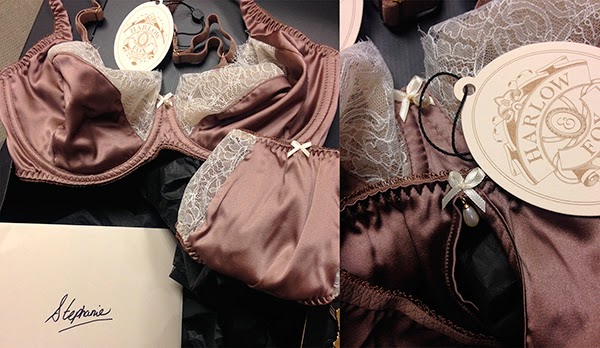 I probably don't have to tell you that Harlow & Fox's construction is impeccable. Both the exterior and interior of the Eleanor bra is as perfect as I've ever seen, and I love that there's an extra (hidden) attachment to the side sling underneath the lace for added support. The straps are wide, soft and luxurious and the hardware color is a rare treat: gold. Every addition Harlow & Fox adds amps up the brand's fine lingerie game, and I'm so delighted to own this set! One of the sweet flourishes seen in both the Full Cup Bra and the Brief (which has a rear keyhole!) is the pearl drop detail. Such a sweet, memorable addition. And I didn't realize it while I was taking these photos, but Harlow & Fox also sent me their Special Washing Agent, something I'm really excited to try.

I'm not sure if it was the Special Washing Agent, but I should also mention that the package itself smelled heavenly. Just another treat for the senses. Thank you so much, Leanna and Harlow & Fox. I am one very happy giftee!
Posted by Evgenia Lingerie at 6:20 PM No comments:

This is the second year I've been invited to participate in the Lingerie Secret Santa, which is just what it sounds like! A bunch of indie lingerie designers get together each holiday season and send lingerie to each other - it's a wonderful way to add new pieces to our respective collections, plus share our own pieces with a new audience.

This year I was lucky enough to have Karolina Laskowska as my giftee. Karolina is one of the most talented independent lingerie designers I know, so sending her some Evgenia pieces was both super exciting and a little nerve-wracking. Her work is exquisite and I had hoped against hope that mine would measure up. 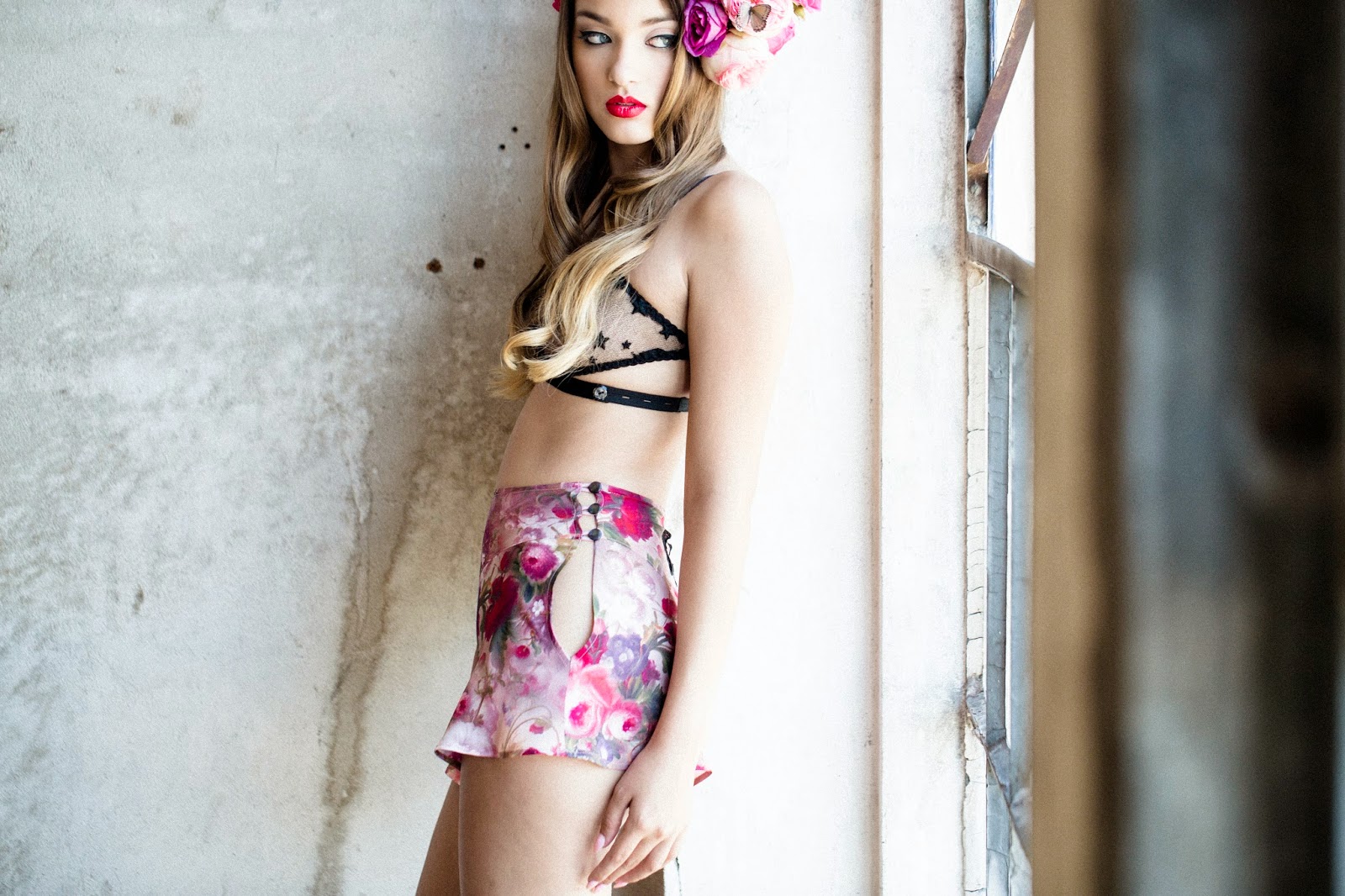 The above ensemble from my Spring/Summer 2015 Night Garden collection has gotten a good amount of attention, so I figured it would be a fun set to send to Karolina, in addition to a matching Sleep Mask to round out the look. 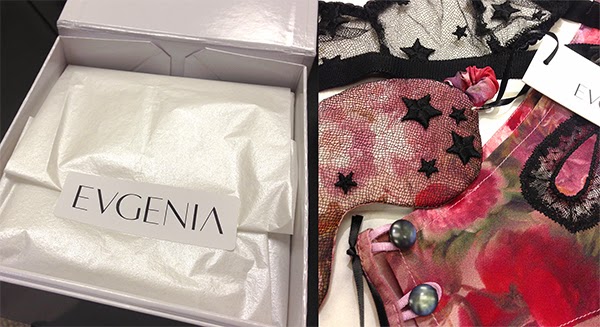 I had a blast sewing this set up. The Sleep Mask was a bit of an experiment and I love how it turned out. After packaging everything up, I sent the box off and was shocked when just a few days later I learned that it arrived in England! While I was shooting my Fall/Winter 2015 collection, the Instagram photos began rolling in, and I was absolutely enchanted with every single one of them. Karolina is a perfect fit, and I couldn't think of a better person to gift Evgenia to this holiday season! 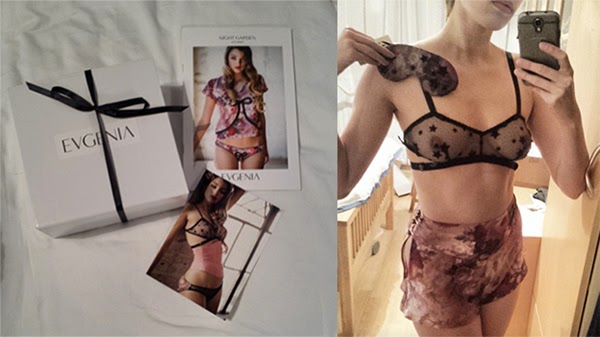 There are tons more pics on Karolina's Instagram page, so head on over there to check them out, and while you're at it, see all the amazing lingerie Karolina creates on her site. You won't be disappointed.

Are you as entranced by this set as I am? Even though only the Bralette is available for sale right now, the Tap Shorts are available for early special order. Just shoot me a message.
Posted by Evgenia Lingerie at 12:28 PM No comments:

The FiSF pOpUp for Charity is TOMORROW!

One of the big benefits of being a Designer in Residence at the Fashion Incubator of San Francisco is the opportunity to host a big pop-up with your fellow designers. And for me, that time is tomorrow!

The annual FiSF pOpUp is tomorrow at the Incubator, 50 O'Farrell Street, from 12 - 6pm. Now's the perfect time to visit Union Square, as the entire area has been transformed into a beautiful park. All the construction is gone and benches and food trucks have been brought in for the holidays.

Participating designers include yours truly, Mansoor Scott, Michelle Byrnes, Min Edition, Sounthavong, Lia Larrea, WHICHKIM, Scarlett Smith and Sarah Liller. A portion of the day's proceeds will go to charity - all the more reason to do your holiday shopping with us!

RSVP here!
Posted by Evgenia Lingerie at 12:30 PM No comments: