When the board of the San Francisco Fashion Incubator asked me to create a gown for the prestigious Go Red for Women runway show at New York Fashion Week, I initially didn't know what to say. As the only lingerie designer in a program mostly populated by womenswear designers, this amazing opportunity was quite the surprise, and, frankly, a challenge I was at once thrilled and a little nervous to take on. While Evgenia's focus is lingerie, I'm not a stranger to making dresses and gowns - in fact, my education at FIDM was in womenswear.

I was asked to submit three initial designs, the first of which was my absolute favorite - a 1930's-themed bias cut gown with star lace appliqués throughout. After some celebrity changes (my first assigned celeb had to back out due to schedule conflicts), I was eventually assigned to dress celebrity chef Carla Hall, a former model who stands at an astonishingly statuesque 6' tall. I was told that she loved my first sketch, was given her measurements and got to work preparing to drape my gown. Because the mannequin I was working with was scaled for a shorter woman, I had to pad her out a bit to fit one considerably taller. With the help of FISF's resident sewing, pattern making and apparel construction expert Dorothy Yuki, I created a totally new form on which to drape. 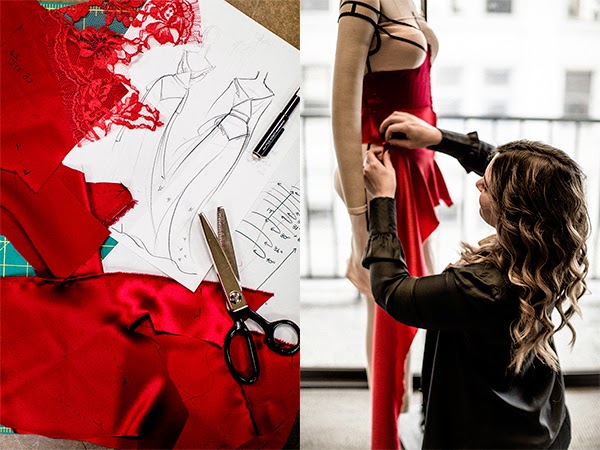 Carla had requested that I pare down the star detailing on the dress, something I was more than happy to do. My first sketches were on the more fantastical side and after some thought I wasn't sure how they would translate to the runway. A more measured approach to embellishment seemed to be more fitting for a Fashion Week show, so I removed the center sash star and a bunch of the star appliqués throughout the top portion of the gown. Because of Carla's past runway experience, I thought adding a sweeping skirt would create a beautiful motion during the show for a confident walker.

I actually did two separate drapes, one for my first assigned celebrity who as 5'2" and the second for Carla Hall. In all, I sewed the bodice four separate times, three times for Carla's gown. Many of the design elements I dreamed up proved to be a bit more complicated to execute than I'd initially thought. For example, the gathering at the bust caused some issues with the waist seam (see above) which I had to allow extra ease for. The hip yoke was cut on the bias to allow for maximum fit flexibility, but as any dressmaker knows, bias is a whole different ballgame and can be quite a challenge to work with. After meeting with Dorothy to make the proper pattern adjustments following my first draft, I figured it was time to move into my final fabric with only 12 days to go until New York.

The second draft of Carla's bodice was a million times better with some minor, easy-to-fix issues. At that point, I drafted the skirt pattern and tried it out in some extra silk I had lying around. Dorothy and I agreed that we should allow an extra 6" for the bottom hem to allow for the possibility of sky high shoes. Once I was happy with the final skirt shape, I began cutting in in the final fabric and adding the star appliqués one by one with the help of my intern, Lux. Each of the four panels of the skirt had between 12 - 15 stars on it, each hand-basted, appliquéd by machine and snipped by hand with sewing scissors. 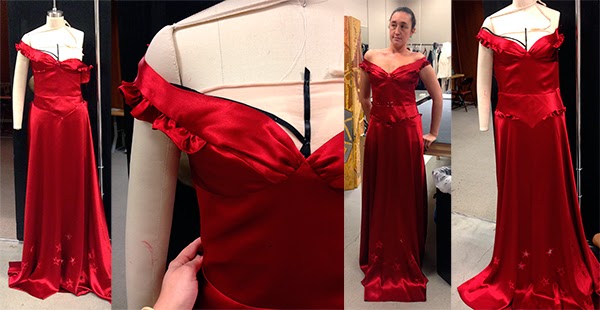 Once the skirt was finished, I was desperate to try the gown on someone with similar proportions to Carla, but I didn't know anyone 6' tall with shared similar measurements. Then a friend suggested I call up 2013 Designer in Residence and kickass designer in her own right Michelle Byrnes. She's not 6' tall, but she's pretty darn close, and pretty close to Carla's body measurements. She came by the Incubator and we tried on the gown. There remained some small fit considerations, but it was clear I was getting a lot closer to the final product! I ended up lowering the waist seam, lengthening the bias yoke and extending the shoulders which yielded… 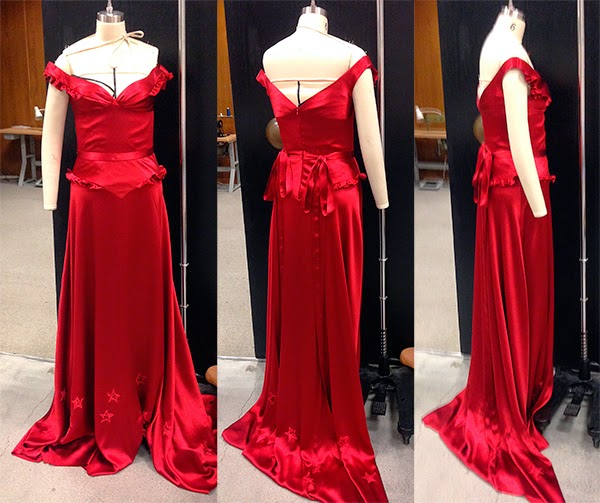 …the final product! Per Dorothy's recommendations, I left large seam allowances at the side seams to manage any potential fit issues that would pop up. Remember, I didn't have a chance to fit Carla in person until my arrival in New York, at which point any major alterations would be out of my hands.

Next up, my final fitting in New York and the NYFW Go Red runway show!
Posted by Evgenia Lingerie at 1:26 PM 1 comment:

I'm finally coming down from all the crazy excitement of being in New York City for fashion week, but it's certainly hard to let go of the high. There's something really special about being in the US' most stylish city during the most stylish time of the year, and even a tiny San Francisco lingerie designer like myself walked away from the experience with tons of things to celebrate.

Of course, there were the expected victories: trunk shows, the NYFW runway show (more on that later), press events, etc. But there were also the amazing connections that were both forged and solidified during my stay, not the least of which was with Sweets of Sweet Nothings. If you've ever visited Sweets' blog, I don't have to tell you how incredibly gorgeous she is. Meet her in person, though, and it's a whole different ballgame. This lingerie blogger is not only physically beautiful (and commandingly tall!), but genuinely warm, friendly, charming and funny as hell. I spent some time with her during Underhaus' Completely Bare Market, where she was repping Harlow & Fox right alongside its lovely and visionary designer Leanna Williams. Leanna, Sweets, NYC lingerie designer (and equally chic and wonderful person) Angela Friedman spent much of our 3-day event in a summit of the mutual appreciation club. Chatting lingerie and fashion with these women was one of the big highlights of my trip back east.

Then Sweets came up with a great idea: why not shoot some of my pieces for her blog? How could I say no? And once I saw her in my Ribbon Corset and Deco Cami, both a perfect fit, we set a date and got down to it. 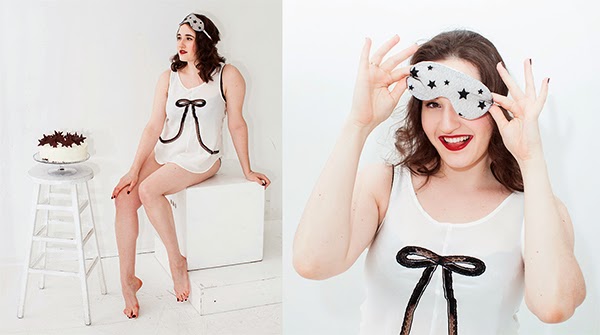 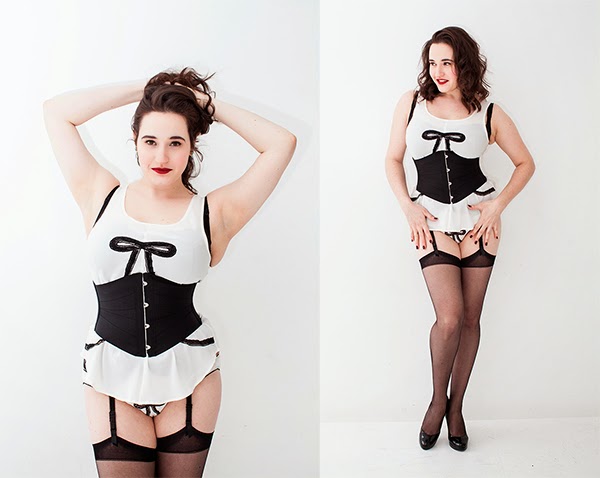 So, lucky me! While I was working the Fashion Incubator press event, photographer Lydia Hudgens took these gorgeous shots of Sweets, and there are tons more on the Sweet Nothings blog, so make sure to check them out. What's more, Sweets paired this set with the beautiful Celestial Truffle Cake pictured above which she made herself. She gave me an enormous slice of it after the shoot and I *may* have eaten the whole thing in one evening. It was that good! Her blog post has the full recipe along with the rest of these gorgeous pictures.
Posted by Evgenia Lingerie at 9:42 AM No comments: