New this Week: Teela and Nina

Following my trip down south, it's been nice to sew like a madwoman again. I'm excited to have two new pieces in store this week... and it's only Tuesday! 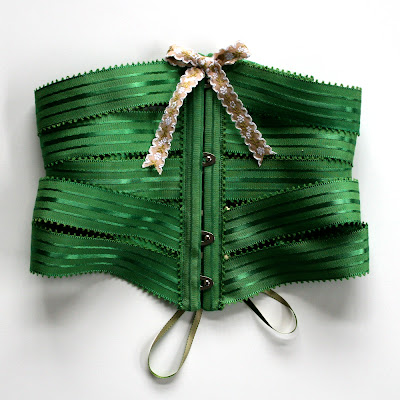 First, meet Teela, a new ribbon corset made out of a deliciously bright vintage petersham. It's sumptuous and sturdy... a lovely, verdant piece to brighten up your wardrobe! 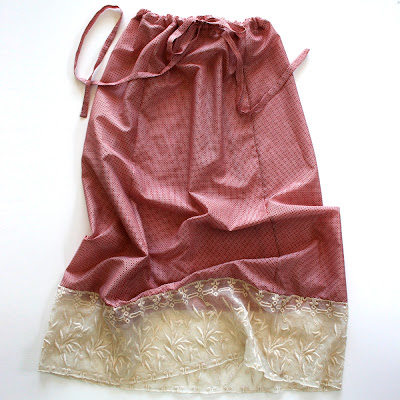 Second, there's Nina, a simply-silhouetted maxi skirt made out of a feathery-light voile. The hem is a gorgeous vintage hand-embroidered net.

Check them out in the Honey Cooler Handmade shop today!
Posted by Evgenia Lingerie at 4:17 PM No comments:

My husband had to attend a conference in Santa Barbara last week, so we decided to make a mini vacation out of what would normally be a boring trip down south. We spent the first few days in Santa Barbara, then drove up to San Luis Obispo and spent our final night in Cambria before hightailing it back to San Francisco. On our way back, we decided to check out a much-talked-about gem in San Simeon, Hearst Castle.

Hearst Castle, built by William Randolph Hearst and architect Julia Morgan, is one of the few true American castles. Comprised of 165 rooms, the Casa Grande portion of the estate (the largest building) comprises over 60,000 square feet. Yes, you read that right! The estate, now a ranch, is 250,000 acres in size. Pretty impressive! The estate was constructed from 1919 up until Hearst's health began to decline in 1947 and includes a mish-mosh of ancient architectural elements and Deco style. Take a peek! 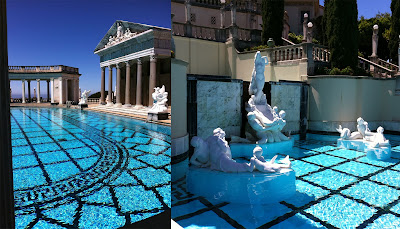 We were first led to the Neptune Pool, the largest and most elaborate pool on the property (there are three total). The columns on the left hand side of the picture above were recovered from ancient ruins. The statues are all carved from marble. Hearst must have had some raging parties here! 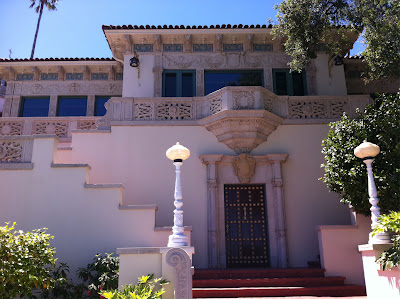 The largest guest house on site, which is about three times the size of my apartment. 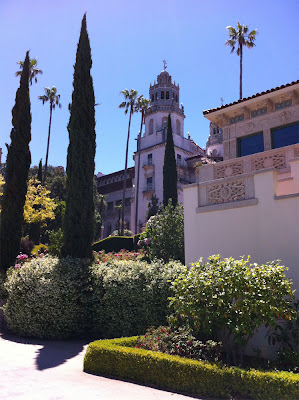 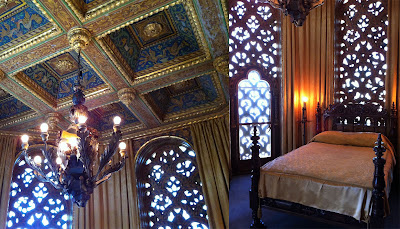 Inside is the lovely celestial suite. Our tour guide called it a jewel box, and it's easy to see why. Sadly, this part of the tour is now off-limits due to California's budget problems. We got to see it on its last day open to the public. 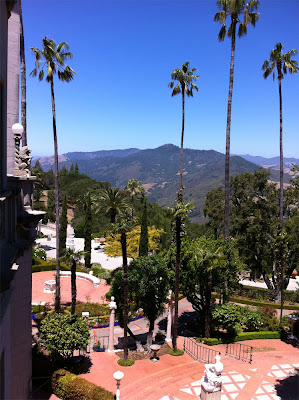 The view was so-so. 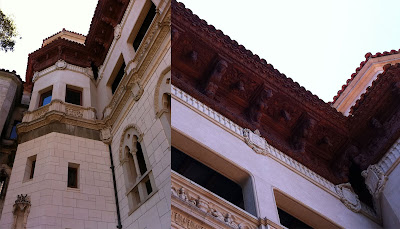 That gorgeous rust-colored detail is actually hand-carved teak, which has to be regularly oiled. 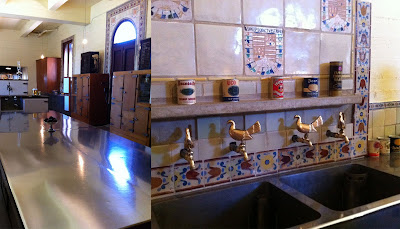 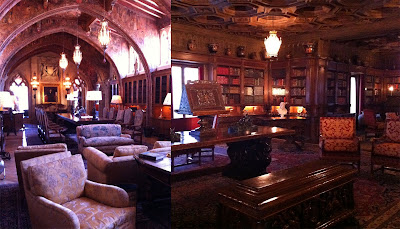 After Hearst and his wife separated, actress Marion Davies became the home's "hostess" and remained a dedicated and loving partner to Hearst until his death. Her room was decidedly lovely. 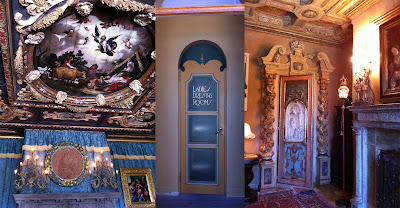 Details details details! Hearst apparently bought a lot of the older-looking pieces from catalogs -- the ceilings are all antique, some hundreds of years old. 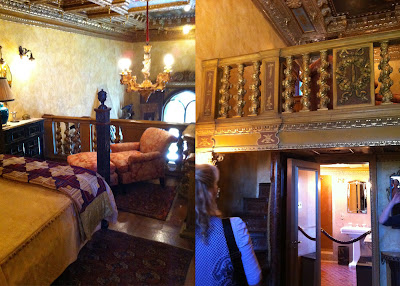 A wicked cool lofted guest room. This reminds me so much of a gussied up version of our first loft in San Francisco. What I wouldn't give for those beautiful details! 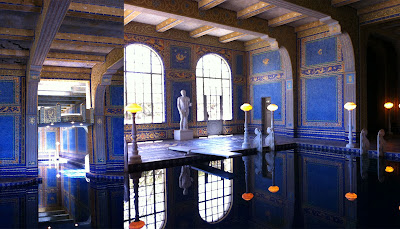 The best was saved for last: the indoor Roman pool. The pool measures 10 feet deep and features a high dive (left). The bottom of the pool is tiled to look like the sky and the ceiling of the structure is painted with an underwater scene. Our tour guide said Hearst wanted his guests to feel as though they were diving into the sky. 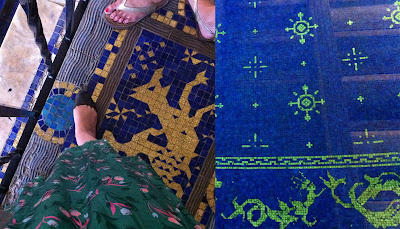 Real gold tiles, both around the pool and in its depths. 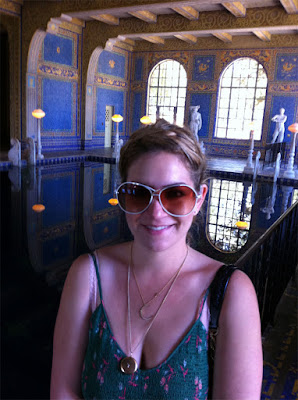 "I claim this pool in the name of Honey Cooler Handmade!"
Posted by Evgenia Lingerie at 10:37 AM No comments:

When I think of Art Deco, I think of beautifully measured symmetry, clean lines and precise geometry, but rules are meant to be broken. So when I decided to make the Queenie Deco Camisole, I threw a little bit of Art Nouveau into the mix - some undulating waves and an asymmetrical floppy bow add a little sass to a simple shell.

Queenie's on Esty now. Why not get acquainted? 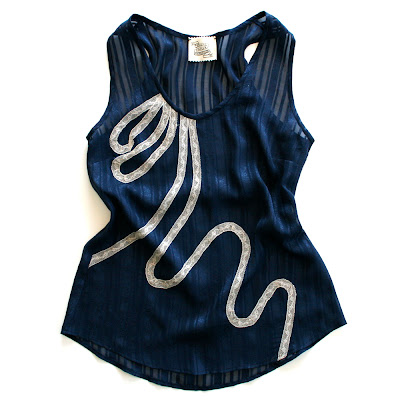 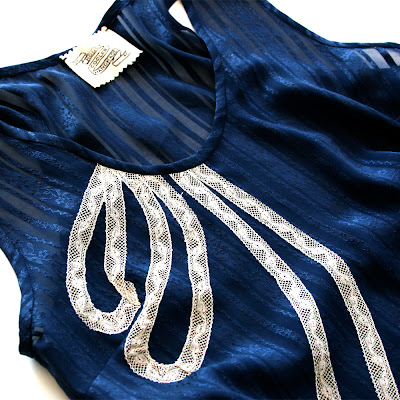 Posted by Evgenia Lingerie at 4:05 PM No comments: 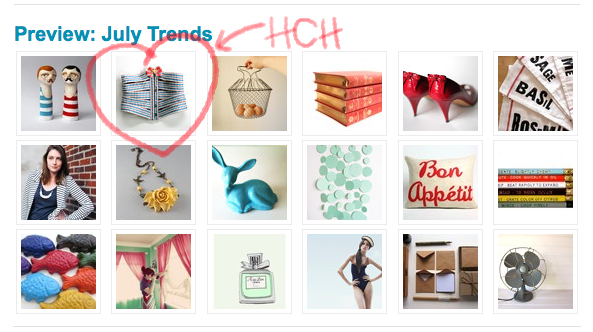 I'm having a hard time keeping it together this morning.

Alberta Ferretti's gorgeous apron dress from Spring 2011 has been on The Outnet for awhile, and has just dropped from $2,540 to around $400 with a summer promotion that's going on right now. I could cry.

The entire shebang is made out of silk organza "ribbons", which are woven together to create a piece that is at once aesthetically gorgeous and totally useless. Someone shake some sense into me. Why am I coveting pieces that have no business out and about in the real world? 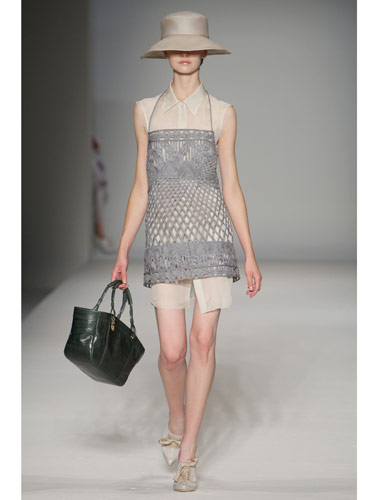 Oh, that's right. Because I don't inhabit the real world. I inhabit a fantasy world in which women wear silk organza aprons to the grocery store. Ok, I hope that sounded as silly to you as it did to me.

(A girl can still dream, right?)
Posted by Evgenia Lingerie at 9:18 AM No comments:

I dig the Rockabilly swallow-on-the-collarbone thing. Always have. Birds are so beautiful and I just love seeing them incorporated in apparel in just about any way possible.

So when in LA last week with my family, when I spotted this amazing Paul & Joe dress, I just had to try it. Lucky for me, it was positively gorgeous on. Unlucky for me, it was also $1000. The patient and earnest saleswoman offered me a discount, but honestly, it would take a substantial drop in price for me to even consider adding something this impractical to my closet. 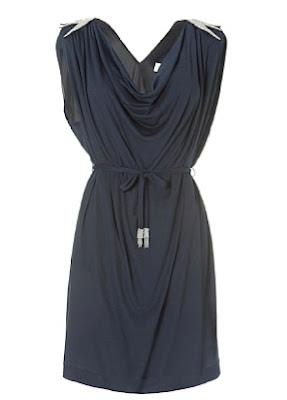 I did manage to snap a photo of the amazing shoulder detail, which features exquisite rhinestone swallows. A decidedly novel approach to a very traditional motif. Yummy yummy! Kudos, Paul & Joe, for turning something oh-so-simple into something oh-so-sumptuous. 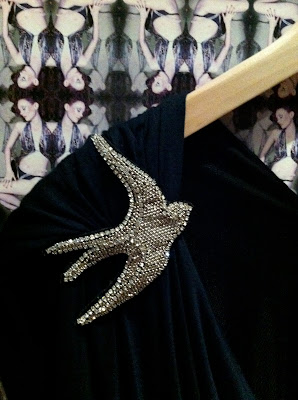 If you're got deeper pockets than I do, you can pick up this gorgeous specimen at StyleBop. Or you can just sit here and drool over photos of it like yours truly. Now, excuse me while I pick my jaw up off the floor.
Posted by Evgenia Lingerie at 9:03 AM No comments:

Whenever I have a lackluster day of sewing I remind myself of this little affirmation:
No matter what our craft, we all started somewhere.
I've always been fascinated by corsetry. Long before I could conceptualize corsets as sexy, my naive brain simply accepted them as beautiful. Every antique store, costume shop and rummage sale had me searching for my first lace-up specimen. It wasn't until college that I finally broke down and learned how to sew, just so I could own one myself. Forget that my first corset fit terribly and that I sewed the lining inside out so that the seam allowances showed. Frankly, I had no idea what I was doing, but who cares? Again, we all started somewhere. 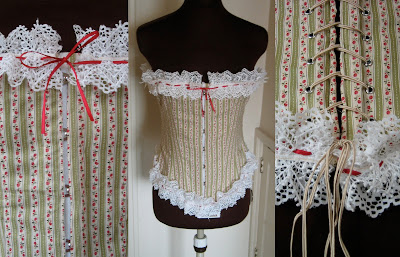 While I was really self-deprecating about my first project's glaring flaws, my friends were much more supportive of my efforts. One of my closest pals at the time even asked me to make her a costume for the Miss Petite America Pageant. She was representing Pennsylvania, and we had decided to give her an amped up Betsy Ross outfit. And let's be honest here. It was college, where every female costume was sexified: from the daringly short toga party sheet dress to the slutty ladybug or the Playboy bunny at Halloween (and yes, I did rock both of those costumes while in college). Given our attitudes toward dressing up, why not a sexy Betsy Ross costume? 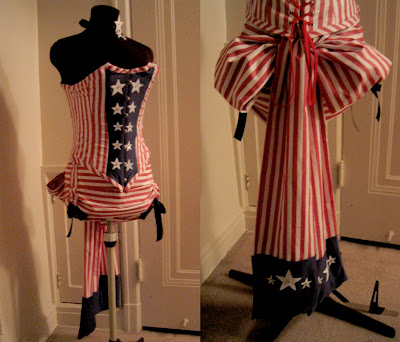 My pal rocked this itsy-bitsy ensemble for the pageant and even told me years later that she broke it out ever July 4th after. Very cool!
Fast forward to now. I've made a bajillion corsets, each better than the last. Now with Honey Cooler Handmade, I channel my love for corsetry and my penchant for wearability into making ribbon corsets, and it just so happens that my newest piece brings back a bit of the sexified Betsy Ross sensibility I first encountered in 2004. She's immaculately sewn, if I do say so myself, and is fittingly named Betsy.
So, here's (new) Betsy, just in time for Independence Day! A little more pragmatic than the previous version, perfect for cinching a starched white summer dress. Check out more photos here! 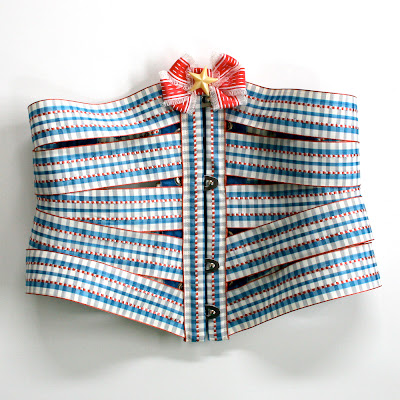